You are here: What to know1 / Culture/Sports

The community of Stroumbi, utilising its tradition as one of the largest, qualitative wine-making villages of Cyprus and wanting to offer to both locals and foreigners the opportunity of being acquainted with the pleasure and taste of grapes and wine, is celebrating -every year in the month of August -the grapes’ festival “Ta Dionysia”. The festival is a great success every year and it is considered the most important event throughout the summer that takes place in the region.

The institution of the “Dionysia” festival has its roots in 1967 when a group of onward-looking people from the community established the “Dance of the Grape”, which was organised in the village’s plaza and lasted for a day.

Ten years later, the “Dionysia” Festival started being organised in the venue where it still takes place today and has taken the form of a three-day festival, the name it has today coming from that detail.

The festival in question lasts for three days and has an amusement orchestra, an area for eating and drinking, games, and dancing. Cypriot and foreign groups with traditional dances and singers appear. Also, displays of folkloric art, painting, handicrafts, fruits, vine-produce, and flowers are organised -as well as other -which receive prizes. Throughout the duration of the Festival, plenty of grapes and “palouze” (must jelly) are offered for free.

On the last night of every Festival, a Star “Dionysia” and a Miss Grape are voted after a dance contest, receiving lavish gifts.

The “Dionysus of Stroumbi” Youth Centre has its headquarters and is active in Stroumpi. It was founded in 1977 by a group of youths from the community and has as a goal the productive entertainment of the community’s youths through group activities / events.
Today the “Dionysus of Stroumbi” Youth Centre numbers about 70 volunteers, young males and females, boys and girls, and is administrated by a committee with 9 members. It has its own premises housed in the communal buildings of Stroumpi, which were granted by the Community Council.

It participates in events / activities that are local, district-wide (Pafos), and national. It has a soccer team, a volleyball team, a theatrical society, and a dance group.

It organises artistic events / activities, soccer matches; it is active and participates in social and cultural events/ activities of other organisations and associations / societies.
Through various lectures, programs, events / activities, and through education / information about smoking, drinking, and drugs, it helps the community’s youths in dealing with the several problems that preoccupy the youth today.

It is a Youth Centre that is active in the Pafos district and generally in the community of Cyprus. Through its presence in the Stroumpi community, the Youth Centre aids with the entertainment of the young, the development and progress of the village, and it generally is a “seedbed” for a healthy youth. 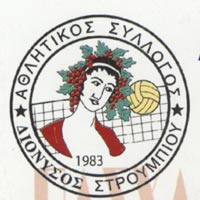 Dionysus of Stroumbi was established in 1983 in Stroumbi and since the first year of its foundation it promoted and cultivated volleyball. In the 1991-92 period it secured its promotion to Division A, in which it remained for three consecutive seasons. Since 1991 it uses Pafos as its headquarters / home, preserving however the name “Dionysus of Stroumbi” in honour of those who founded the club in Stroumbi.

It is purely a volleyball club that is characterised by fine organisation and the excellent work taking place in the infrastructure departments. A true jewel for sports in Pafos since, despite the many problems and vicissitudes, not only does it promote and cultivate the sport of volleyball in depth but it also manages to excel. A milestone for the club’s history was its collaboration with the Serb-Cypriot coach and player Dragan Milosevich, who significantly aided the development and progress of almost all of the departments. In the 1998-99 period the men’s team, comprised mostly of young volleyball players aged 16 and 17, was relegated to Division B, making a strong comeback the very next season and managing to excel. In the 2000-01 period it had an excellent course and managed to secure the 4th position in the championship, participating in the 2001 SPINGFIELD Final Four for the first time in its history. In the 2001-02 period it finished in the 3rd position during the normal season of the championship and was -once again -present in the sport’s great feast; in the 2002-03 season it participates in the Final Four for the Third consecutive time.

The very good work done in the infrastructure departments of Dionysus has already brought excellent results. Under the guidance of Dragan Milosevich, Dinoysus has tens of children in its ranks -aged up to 19 -and already has great accomplishments to present.

In its twenty years of life, Dionysus has many and substantial successes to demonstrate.